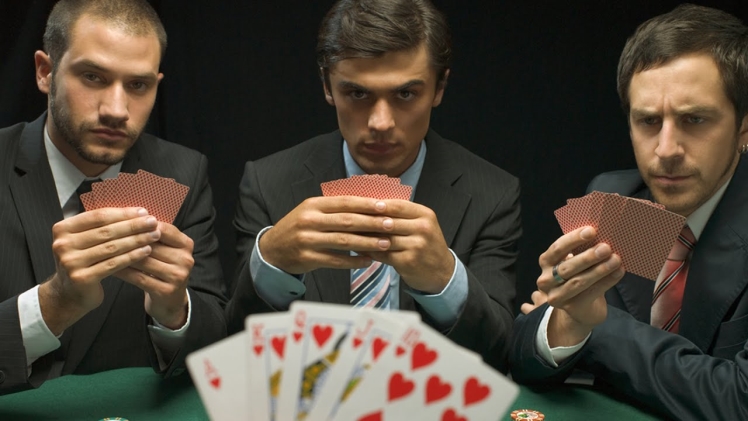 THE LANGUAGE OF POKER

RG to Poker 007-099.indd 45 23/9/05 10:32:23 am 46 Learning the Language If you want to enter the world of poker and be a player, then you had better learn the language. Poker has a long-established and varied vocabulary, and if you don’t understand it you won’t know what is going on around you. And what happens next is you lose money.

Some of the phrases are obvious and others less so and, not surprisingly for a game that requires sharp wits, some are very funny – which also makes them easier to remember. A ACES UP any two Pair which includes a pair of Aces. ACTION the betting in a hand. Plenty of action means lots of chips or money being bet in the pot. ACTIVE PLAYER a player who is still involved in a hand of poker. AGGRESSIVE a player who bets frequently or in many hands.

AK Ace-King starting hand – derived from tennis player Anna Kournikova (looks good but rarely wins). See also Big Slick ALL BLUE a Flush which includes either Spades or Clubs. ALLIGATOR BLOOD a description of a player who survives a long time with a short stack. ALL-IN when players go all-in, they put all their chips in the pot. If they lose, they are out of the game. ALL PINK a Flush which includes either Hearts or Diamonds.

AMERICAN AIRLINES a Pair of Aces as starting cards in the hole. ANTE a compulsory bet from all players before the cards are dealt. AQUARIUM a poker game with a lot of fish in it. THE GAME OF POKER • RG to Poker 007-099.indd 46 23/9/05 10:32:23 am 47 ASSASSIN a term used to describe a player in a tournament who goes on a streak of eliminating other players. B BACK-DOOR most commonly used to describe a playable hand that the player was not originally trying to make.

BACK RAISE the action of reraising another player’s raise. BAD BEAT a loss when the player had the better odds of winning the hand. All poker players have a wealth of bad beat stories. BET to put chips or a wager in the pot. BET THE POT to bet a number of chips equivalent to those already in the pot. In pot-limit games this is the maximum bet allowed. BICYCLE see wheel BIG BET in a limit game the big bet is the larger of the two bets.

For instance in $10-$20 Hold’em the big bet is $20. BIG BLIND a compulsory bet twice the amount of the small blind. These ensure a pot has action. See blinds BIG LICK Six-Nine (6-9), hopefully requires no further explanation. BIG SLICK slang for an Ace-King starting hand. See also AK BLANK a card dealt that helps nobody. BLIND GAME a game which requires blinds.

Visit here to know about the newsfie where you can get the most trending latest news posthut. By the way, this copyblogger site also analysis the recent headline news around the world.

Find out the best movies download website 9xmovies baby, where you can get the latest movies for free.